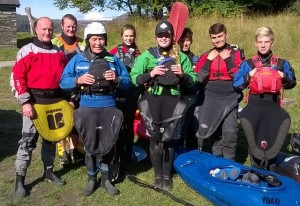 Five club members participated in a 3 star white water kayak assessment on the River Dee in Llangollen last Sunday. All five were successful in gaining their 3 star award having worked hard with the club coaches in the months running up to the assessment.
The three star award represents the highest level of personal attainment award offered for white water kayaking by British Canoeing, which doesn’t involve river leadership or coaching. It is an assessment which many older more experienced paddlers have failed. “These kids shouldn’t underestimate the significance of this award”, commented club coach Mark Ebrey following the assessment. “It puts all five members in a strong position to progress onto the formal white water river leadership and coaching qualifications when they are older”. Mark Sampson, another coach from the club who has been largely responsible for training the five prior to assessment said “over the last few months all 5 have worked hard, attending extra training sessions which involved both personal skill development and river safety whilst also working on some of the more theoretical aspects of paddling. We hope that some or all of them will now consider transferring their skills from kayak into open canoes and trying to become more rounded paddlers who are skilled across all disciplines of paddlesport.”
Ian McMullen, club President and British Canoeing Coach of the Year 2014 said “I’m delighted for the five. It just goes to show what youngsters are capable of achieving when they put their mind to it. Their success in the star aware program continues a long tradition of junior paddler development at the club which has, in the past has seen paddlers go on to compete at an international level.”