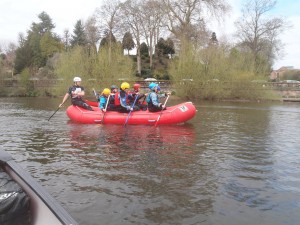 Luke and Liam Dorbin joined the Sunday paddlers, giving people a go at rafting to show members of the club what they do and who knows inspire the next generation of raft racers.
Luke stated “The sport isn’t well known in Britain and we are all working hard to change that, the opportunity to give the kids down at the club the chance to experience it and see them enjoying it so much just goes to show we are heading in the right direction.”

Luke and Liam both spent their younger years kayaking down with Chester Riverside Canoe Club, way before it changed names. We both enjoy going back every now and again to see old friends and meet all the new faces but we never go enough.

Since then we have both represented Great Britain in White Water Rafting as the Junior (Under 23) team in New Zealand for the World Championships in 2013. Now we race as part of a team called North West Rafting and earlier this year we placed second at the GB selection event granting us GB2 status, which allows us to go to the European championships at the end of May to represent Great Britain again.

Going forward
We would love to organise a couple of rafts to come down with some other representatives from British Rafting and organise a race day for the club so they can have a bit of a competition between a few teams.